In the year when he performed the Hajj, then wrote a book about it, between 1990 and 1993, Michael Wolfe became aware of a string of accounts by Muslims and non-Muslims who over the last one thousand years had gone to Mecca on the pilgrimage. Wolfe’s accounts are collected into a single volume called One Thousand Roads to Mecca, and the first of the twenty-four edited accounts is based on the Book of Travels, a classic text by the famous Ismaili poet, philosopher and traveller Naser-e Khosraw who lived during Islam’s expansive Middle period between the 11th and 14th centuries. The period has also been called the Golden Age of Muslim travel and, as Wolfe notes, Khosraw set the tone for a thousand years of Persian travel writing.

To begin reading Naser-e Khosraw’s spirited account of his journey, with an excellent introductory essay by Michael Wolfe, please click One Thousand Roads to Mecca: Naser-e Khosraw’s Writing About the Muslim Pilgrimage,  or the image below. 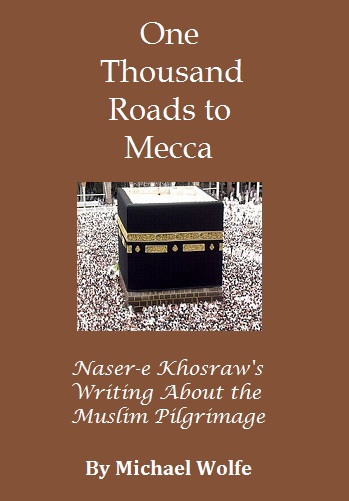