The University of Central Asia hosted an event marking the release of a new book about the French Medical Institute for Children (FMIC) on 17 March 2016 in Bishkek, Kyrgyz Republic.

A Place of Miracles: The Story of a Children’s Hospital in Kabul and the People Whose Lives Have Been Changed by It chronicles the hospital’s founding, through an innovative four-way partnership between the Government of Afghanistan, the Government of France, the Aga Khan Development Network (AKDN) and the French NGO, La Chaîne de l’Espoir in Afghanistan.

Attended by Kyrgyz Republic government representatives, the diplomatic corps, civil society and academia, the presentation highlighted the public-private partnership that established FMIC, a state of the art medical facility in Kabul providing high quality health care in a challenging environment. The Institute is managed by the Aga Khan University (AKU), which provides advanced medical education to Afghan surgeons and physicians. 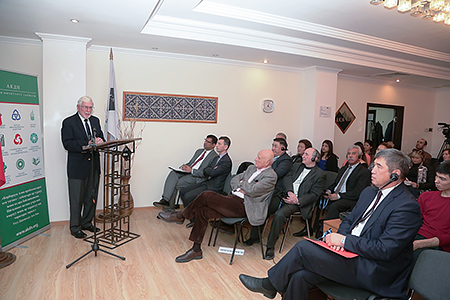 FMIC Chairman Lee Hilling presented the non-profit hospital’s history, compiled in A Place of Miracles. The not for profit hospital is known in the region for providing exemplary healthcare to men, women, and children from all 34 provinces of Afghanistan, regardless of ethnicity, religious affiliation, gender, or financial means. During its ten years in operation, more than one million patients have benefitted from FMIC’s services.

Hilling noted that FMIC has had far reaching impact on both the patients who seek treatment and the Kabul based staff.

“The FMIC responds to the critical need for essential health services in Afghanistan, through medical services and efforts to create a pool of qualified health professionals across specialisations,” Hilling noted. “This achievement is due, in large part, to the commitment of each founding partner.”

Former President of the Kyrgyz Republic, Her Excellency Roza Otunbayeva, praised FMIC, calling it an example for healthcare in Central Asia.

“The achievements of the FMIC are remarkable. I am very impressed by its ability to attract leading international specialists to partner with their Afghan counterparts and provide sustainable, quality health care. From this we can all learn the importance of collaborating to create meaningful bonds across various geographies, institutions, and peoples to improve the quality of life for people in Central Asia and beyond,” said Otunbayeva.

FMIC has been hailed as a model for other countries in the region to consider and emulate. Dr Amangeldi Murzaliev, Deputy Minister of Health of the Kyrgyz Republic, noted that the Ministry is currently working to increase access and improve the quality of maternal and child healthcare in the Kyrgyz Republic. Public-private partnerships modeled after FMIC have an important role to play, said Murzaliev.

“The FMIC is the result of the efforts of the many men and women contributing to its establishment and ongoing operations. While leading French and Afghan nationals initiated the idea of a medical facility in Kabul with international standards, the Institute is a result of the private energies of individuals from many countries, coupled with the unwavering support of the two government and two civil society founding partners,” said Catta.