India’s decision to revoke the special status of Jammu and Kashmir in early August, and the repression and communications blackout that followed, is another step in India’s long history of colonising Kashmir.

Narendra Modi’s administration effectively annexed Kashmir by abrogating Article 370 of the Indian constitution, adopted in 1954 to guarantee Kashmir’s semi-autonomous status. But this semi-autonomy has been a hollow shell which has allowed India to engage in torture, extrajudicial killings and mass disappearances. 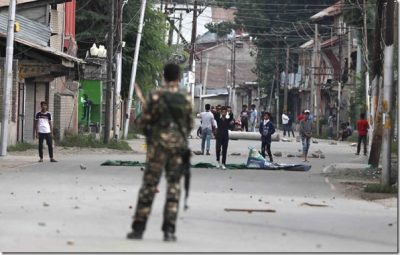 Protesters throw stones at Indian paramilitaries during a protest in Srinagar on August 16. Farooq Khan/EPA

Scholars of Kashmir have called this process a constitutional occupation, and see the repeal of Article 370 as a “decades-long plan” to annex Kashmir.

Though not unexpected, the annexation was shocking. At midnight on August 4, ten days before the 73rd anniversary of its independence, India intensified its military grip over the people of Kashmir. It deployed thousands of extra troops in Kashmir, in addition to the half a million already present.

Since then, there has been a widespread communications blackout, with internet, mobiles phones, landlines, television and radio cut. Harsh curfews were imposed on Kashmiris, the local police were disarmed and at least 4,000 people were arrested, including Kashmir’s political leadership and civil society.

On August 14, a four-person fact-finding mission to Kashmir collated reports of night raids, abduction of young boys, sexual assault of women, torture, and a lack of access to food and medicine. Kavita Krishnan, a rights activist who was part of the team, stated: “Frankly, it looks like occupied Iraq or occupied Palestine.”

Some restrictions on movement eased on August 19, but Kashmiris remain in a state of siege.

Kashmiris have been living with widespread and systematic human rights violations for the past three decades, most recently highlighted in reports by the UN Office of the High Commissioner in 2018 and 2019. These reports address the situation on both sides of the Pakistani and Indian line of control in Kashmir, though India’s brutalisation of Kashmiris is striking. 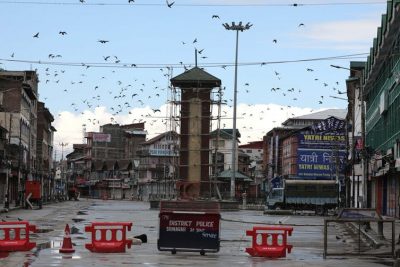 While Kashmir is considered an international territorial dispute between Pakistan and India, for Kashmiris their struggle is one of self-determination.

At the Partition of British India in 1947, Kashmir’s independent princely ruler, Maharajah Hari Singh, signed an Instrument of Accession with India. He was under pressure from a Kashmiri rebellion against his unpopular rule, but did not ask his people what they wanted. The accession was based on the promise that Kashmiris would have a plebiscite or referendum to decide their political future.

Between 1948 and 1957, following a war between India and Pakistan over Kashmir, UN resolutions reaffirmed the right of Kashmiris for a free and fair referendum. But they have never been granted one. Now India’s revocation of Article 370 is an attempt to transform Kashmir’s unresolved international status into a domestic issue.

The case of Kashmir is immensely significant for scholars of colonialism in all its forms. In my own research, I’ve argued that India’s colonialism of Kashmir demands a recalibration of one of the central tenets of these studies: the division of the world into the Europe that colonised, and the non-Europe that was colonised.

This doesn’t mean ignoring the legacy of European colonialism. Major colonialists such as the British, Spanish, Portuguese, French, Dutch and Belgian powers changed the world forever through conquest of territory, slavery and dispossession of non-European peoples. We continue to inhabit a world whose knowledge, political and legal systems are structured by these colonial legacies.

Post-colonial nation-states such as India continue to use British colonial laws to crush any dissent for rights or justice. Modi’s current Hindu nationalist government draws on these laws and extends them as it undermines the rights of tribal people, religious minorities, Dalits and women. The Hindutva, or Hindu nationalist, ideology which Modi’s BJP party espouses was born in the matrix of British colonialism and inspired by European fascism in the early 20th century.

But the case of Kashmir demonstrates India’s own long history of colonialism. India’s latest move also abolished Article 35a of the Jammu and Kashmir state constitution, meaning non-Kashmiris are now allowed to buy land, hold jobs and further colonise Kashmir’s rich resources. As historian Hafsa Kanjwal argues, the influx of Indian settlers is designed to change Kashmir’s demography and may lead to ethnic cleansing, inaugurating India as a settler-colonialist state in Kashmir.

India is already part of an unwritten alliance with other settler-colonial states, such as Israel and the US, based on a destructive arms trade. Both states were created through a history of massacres and violent dispossession of Indigenous and Palestinian peoples.

In explaining its decision to revoke Articles 370 and 35a, India has used the language of counter-terrorism that has become so common since 9/11, coupled with the promise of corporate development. These are two classic colonial justifications reframed for a 21st-century lexicon.

Research and resources about India’s colonial occupation of Kashmir, and Kashmiri resistance to it, are now available at #TheKashmirSyllabus, while updates about the current military blockade are available from the Kashmir Scholars Consultative and Action Network.

The full consequences of the geopolitical tinderbox created by India’s move are still emerging. While the international community urges restraint and bilateral dialogue between India and Pakistan, Kashmir’s right to self-determination must now take centre stage. Kashmiris continue to experience an unbearably suffocating state of siege, and they speak of resistance, come what may.

Associate Professor at the Department of Sociology, University of Warwick

Republish our articles for free, online or in print, under Creative Commons licence.