In a captivating occasion in Kazan earlier today, 13 September 2019, Mawlana Hazar Imam presided over the prize-giving ceremony of 14th cycle of the Aga Khan Award for Architecture. In his speech, Hazar Imam described several ways in which architecture can blend differing perspectives, and reiterated its potential to inspire and enrich creative dialogue.

Six award winning projects were honoured during the presentation ceremony held at the Musa Jalil Tatar Academic State Opera and Ballet Theatre in Kazan, in the Russian Federation. The Aga Khan Award for Architecture is one of the oldest and most prestigious awards in architecture. 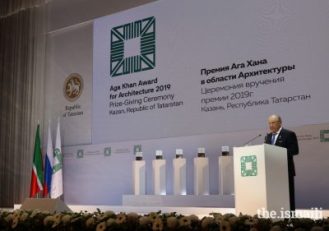 Mawlana Hazar Imam and Mintimer Shaimiev, State Councellor of Tatarstan, pose for a group photograph with winners of the 14th cycle of the Aga Khan Award for Architecture.PHOTO: AKBAR HAKIM

Guests gathered at the Musa Jalil Tatar Academic State Opera and Ballet Theatre in Kazan for the prize-giving ceremony of 14th cycle of the Aga Khan Award for Architecture.PHOTO: AKBAR HAKIM

The recipient projects — which are in Bahrain, Bangladesh, Palestine, The Russian Federation, Senegal, and the UAE — offer creative responses to contemporary issues such as climate change, connectivity between people, and the challenge of adapting to new contexts.

In his address to guests gathered at the event, Mawlana Hazar Imam, who Chairs the Award’s Steering Committee, expressed that “Architecture — more than any other art form — has a profound impact on the quality of human life. As it has often been said, we shape our built environment – and then our buildings shape us.”

A dialogue of partnership

During the current cycle of the Award, the Master Jury paid particular attention to the inclusion of all participants in the architectural process. These include clients, public officials, builders, designers, educators, and craftspeople.

One of the award-winning recipients, the ambitious Public Spaces Development Programme in Tatarstan utilised exactly this type of inclusive approach, and in the process reinforced the sense of community, the identity of towns, and the quality of life in the area. The project’s interventions have been highly participatory, based on engagement with local citizens, consultation with economists and anthropologists, and has attracted young designers and architects. The overall effect has been positive social, economic, cultural, physical, and ecological change.

Prior to accepting the award, Mr Mintimer Shaimiev, State Councellor of Tatarstan, joined Mawlana Hazar Imam on stage to present certificates to winners, and in his speech to guests, he expressed gratitude for the decision to host the Award Ceremony in Kazan. Addressing the Imam directly, he said, “You are implementing the largest charitable, educational and humanitarian projects, supporting proactive, creative people, regardless of nationality or confession. Your peacekeeping mission, your commitment to bringing civilisations closer and achieving unity in diversity are in tune with our goals”

A dialogue between past and future

Speaking of the relationship between the past and the future, Hazar Imam explained, “The dialogue we seek is one that will blend the inspiration of the past with the demands of the future. The demands are many: environmental, social, technological, and economic, not to mention the challenges of political polarisation. In all of these respects, looking back can help us look ahead – and vice versa.”

The Palestinian Museum in Birzeit offers an ideal example of this dialogue. With support from a nearby university, the Museum is a flagship forward-looking project of Palestine’s largest NGO. Its façade and paving uses limestone quarried from near Bethlehem. Similarly, the surrounding gardens are inspired by the local environment, stressing the historical link between the people and the land. The museum provides a home for a variety of artefacts which facilitate learning about the past, while the combination of indoor and outdoor spaces act as a force for hope for current and future generations.

A dialogue between natural and human

“Both the natural world and the world of human capacities are divine gifts, but it is tempting sometimes to embrace one without thinking much about the other,” said Mawlana Hazar Imam during the ceremony. Sustainable solutions to complex challenges were a recurring theme among the winning projects in 2019, with each one utilising a combination of the human and the natural to address an urgent environmental need in its own context.

The Arcadia Education Project in Bangladesh illustrates an innovative solution to rising sea levels. The modest riverside school, made of bamboo and other local materials, represents an amphibious structure that rises and falls with the local river’s water level, and thus adapts to its surroundings.

Once a waste dumping ground, the Wasit Wetland Centre in Sharjah, UAE, has had its indigenous ecosystem restored, and proving to be a popular place for visitors to learn about their natural environment. Blending into the landscape, the focus of the project is on the surrounding nature, local wildlife, and waterways.

Alioune Diop University Teaching and Research Unit in Bambey, Senegal, provides an example of how sustainability and energy efficiency can be translated into elegant design. In the West African heat, the building’s breeze blocks allow for ventilation, while reflecting direct sunlight.

A dialogue among diverse cultures

The Aga Khan Award for Architecture is itself a celebration of difference and diversity — of cultures, languages, and beliefs — with this year’s winning projects hailing from South Asia, West Africa, Eastern Europe, and the Middle East.

“Pluralism means more than merely tolerating a diversity of influences and ideas. It also means welcoming the learning opportunities that diversity provides, finding ways to honour that which is unique in our individual traditions as well as those values that connect us to all of humankind,” said Hazar Imam.

With its mix of restored historical buildings with well-designed new ones, the Revitalisation of Muharraq in Bahrain, has infused new cultural life into a deteriorated urban area. While establishing a platform for citizens to actively engage with one another, the project provides a space for professionals of different backgrounds to interact and collaborate, and for local businesses and partnerships to thrive.

Expressing his belief in the potential of dialogue to address modern challenges, Mawlana Hazar Imam explained, “A true dialogue requires not only that we articulate one perspective, but also that we listen – attentively — to other perspectives. More than that, it asks us not only to listen to one another, but also to learn from one another.”